You are here: Home > Archives for Holland America 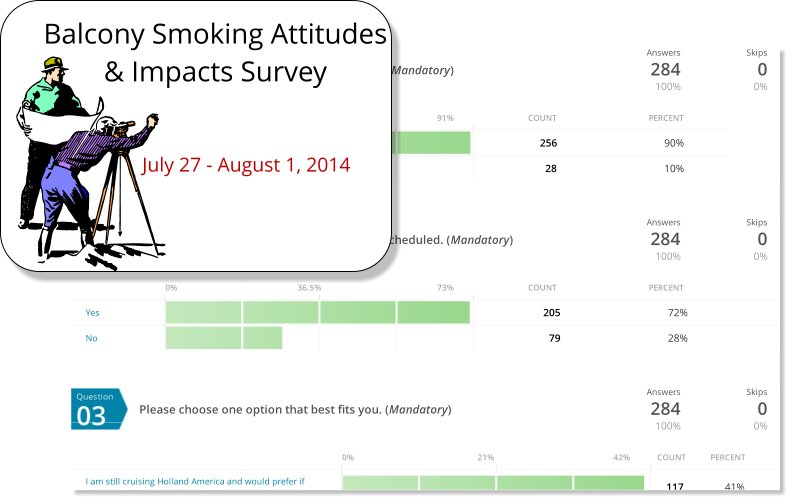 Here at The National Institute of Cheer, we tackle the big issues like corkage policies, cruise line beverage packages, and building a flying laboratory. We’re big fans of the website Cruise Critic and we find it to be an excellent source of information when we are planning a cruise vacation. If you are thinking about booking a cruise or you already have one booked, Cruise Critic’s message boards should be on your list of places to visit.

One of the most frequently discussed issues on Cruise Critic’s Holland America message board has been the smoking policies, particularly those that deal with balcony smoking. To say that the pro-verandah smoking and the anti-verandah smoking people don’t get along is an understatement. There have been many, many posts on the subject – including a few that attempted to take the pulse of the Cruise Critic audience to determine where public sentiment lies. The problem, in our estimation, was that the threads on smoking all came at the issue from either the pro or the anti side. You could tell where the original posters head was at by the way the questions were worded. There were even posts with directives like: “Post only if you agree with me.” (Apologies to the people who originated those threads, but if you want to get a more accurate reading, you really need a question set that allows everyone to answer, regardless of his or her views.)

We wanted to get some better data so that we’d have a more complete and representative picture. In order to accomplish this, we were going to need a multiple question survey that allowed us to ask several questions, collect the responses, and filter the results when the data collection phase was complete. For example, it makes sense to look at the differences in results between smokers and non-smokers, different age groups, and people from different geographic areas. Being able to filter the data and look at sub samples will allow us to do just that. The fact that the polling engine performs all the calculations and filtering a is huge plus.  This is an independent survey and is not affiliated with any cruise line or travel company.

Cruise Critic has a polling engine, but it is limited to one question with a total of 14 multiple choice selections. That may be fine for some projects, but it simply lacks the horsepower for this particular task. As a workaround, I set up a survey on Polldaddy, WordPress’/Automattic’s polling engine. By removing the survey from the discussion board, we theorized that participation levels might be higher. A survey participant could simply answer the survey questions and be done. No fuss, no muss, and most importantly, no need to wade into the fracas of another smoking fight.

In the sixteen hours or so that the original thread asking for participation was up on the HAL message board, the survey received 284 unique responses. This validated our theory that participation would be higher if survey respondents could avoid the drama of posting their position publicly in a thread. The survey engine threw away several attempts at over-voting (Shame!) and logged all the responses. There is some additional information on the survey thread removal below, but this article is about the intermediate survey results.

The survey consists of six questions/statements designed to collect data in the participant’s attitude toward balcony smoking on the ships of Holland America Line. The survey engine allows one response per computer and limits the number of responses for a single IP address to two so as to allow both spouses in a household to participate. Questions 1-4 were required in order for the survey to count. Questions 5 & 6 were optional.

My initial intent was to limit the amount of intermediate reporting on the survey so as not to influence results. In my view, it would be best not to inspire one side or the other to rally the troops and exert undue influence over the survey’s results. Here at the Institute, we aim for accuracy. However, with the break in the voting that has accompanied the removal of the survey announcement thread from Cruise Critic, it seems like a good time to take a readout. Two hundred eighty-four of you took the time to vote and we owe it to you to let you know where things stand.

If you would like a nice, easy to read version of the survey report. you can simply click the image below. The results are published in Adobe Acrobat format, so you will need Adobe’s free Acrobat reader. It’s come standard with every computer I’ve owned for close to two decades, so odds are you already have it.

Reminder: You can still take the survey until Friday, August 1st at noon. It’s your chance to have your voice heard, or your clicks count, or something like that.  (This whole paragraph is a link. Click on the text of you want to complete the survey. The average participant finished the survey in one to two minutes.)

Are you a busy executive, always on the run, without spare time to download and open PDF attachments?  Perhaps you can never really figure out where all the PDFs go when you download them on your phone or computer. (They’ve got to be somewhere, right?) In that case, this section is for you! It’s just the percentage results from each of the questions. No filler.

Before we begin: The National Institute of Cheer’s Department of Hard Feelings Prevention would like to point out that the non-smokers may be tempted to do a victory lap based on the preliminary results here. Please avoid doing that. Once you start to slice and dice the data and look at the preferences of each group individually, you’re going to find that the there is something to be said on both sides. The smokers make up the smallest percentage of the survey sample. That means that for every smoker’s response, there are four responses from non-smokers/former smokers.

Question 1: I consider myself a Holland America cruiser.

Question 2: I have an upcoming Holland America cruise scheduled.

Question 3: Please choose one option that best fits you.

Question 4: Which best describes you?

Note: While the survey did collect user reported location data, the country data in the table above comes from system IP geolocation information and was not complied from participant’s responses.

Question 6: What is your age group?

If you would rather have a deluxe copy of the results with pretty bar graphs, you can download a PDF version for viewing and printing. Missed out on taking the survey? You can cast your vote until Friday, August 1, 2014 at noon Eastern.

About The Original Survey Thread

Well, I suppose if you’ve made it this far, you would like to get an explanation of what happened with the thread on Cruise Critic. This is my side of the story. It’s against the Cruise Critic’s rules to discuss any of their decisions or actions on the site’s message boards. They request that you write to: community@cruisecritic.com instead.

As I mentioned waaaaay earlier in this article, we decided that the only way to properly collect the data needed for this project was to use an actual survey engine. Cruise Critic’s one-question, maximum of 14 multiple choice answers polling tool wasn’t going to work. Before I took the time to work up the survey on Polldaddy, I read through Cruise Critic’s policies and familiarized myself with them. I wanted to make sure that I was not running  afoul of any of their published rules and guidelines before I started. Based on my reading, it looked like everything should be okay. At this point, having done my due diligence, I got to work on creating the survey. I’ve been doing market research surveys for a long time, so the setup went quickly. Once I knew that the survey engine was properly configured, I started a new thread with the title, “Non-Biased Smoking Survey, No Agenda.”
I explained that I was trying to get some objective data that would be collected in a non-biased manner. An explanation as to why this could not be accomplished with Cruise Critic’s polling tool was also provided. I went on to tell people that I would publish the survey results, with pretty graphs, in the thread at the conclusion of the survey.

The thread was very civil as far as smoking threads go.  There was one poster who wanted to argue that all surveys were biased because they measured opinions (Huh?), but other than that, it was a fairly normal thread, and a darn sight less contentious than almost all the other smoking threads I have seen. Host Walt closed off the the thread to new posting about four hours and fifteen minutes after I first posted “pending review by Cruise Critic management.”

Around lunch time the day after I first opened the thread, I received a notice from Laura S indicating that the thread had been removed because “OUTSIDE SURVEYS NOT ALLOWED.” Since I had read the message board guidelines pretty carefully, I went back through to see what I had missed.  There is nothing about surveys in the guidelines whatsoever. The forum rules, guidelines, and terms of service are completely silent on the issue of surveys. There is some information on polls, but it is in the vBulletin help files that came with the board software. It’s Cruise Critic’s site, and I respect their decision to do what they wish with it. However, it becomes a somewhat difficult to be a rule-abiding participant when there are a set of unpublished, secret rules.  I wrote to the community@cruisecritic.com address twice to explain what you’ve just read and to politely request an explanation. So far the only sound I hear is… crickets.  I now have a “permanent violation” on my Cruise Critic profile. It’s a zero point violation though. I assume that this is because the secret “No outside surveys” rule is less serious than some of their other secret rules and possibly some of their published ones. Who know? They’re not talking.

So, when the survey is done, and we have everything all sliced and diced, I will post the report here on the Institute’s site. That way, it will be publicly available. To those of you who participated, thanks for your input!

It should take a few days to compile the final report after the survey window closes. We will keep you posted.